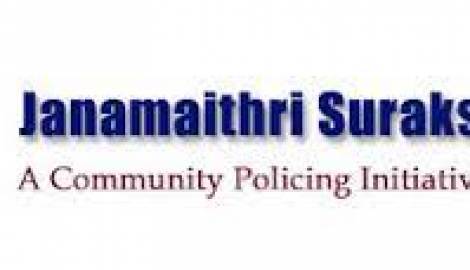 Janamythri Police activities are organized with a view to give more confidence among the public regarding the service of police and to create a consciousness among them that police force is a companion of the public and there by receive their assistance in the detection of crimes and to provide better service to them.

As part of the house visit every beat officer visit at least 12 house in a day and collect the details regarding the family members and living conditions of the members. During the house visit, beat officer conduct a free interaction with the family members and collecting the details of the family members, special assistance is being given to the old aged people, bed ridden, old people residing along, children who dropped education and people who are financially very weak condition. Awareness and support is being given to the eligible people regarding various schemes provided by the Government to the weaker and old aged people of the society.

From 24.02.2020 M-Beat application is launched and after that the collection of data is being done using the application. M-Beat system is being implemented in all the police stations of Thrissur Rural except Vanitha P.S Irinjalakuda and Coastal P.S Azhikode & Cyber Police Station, Irinjalakuda. In the circumstance of Covid-19 pandemic, Janamythri beat officers are also engaged in the prevention activities against Covid-19.

Janamythri awareness classes are being conducted in the subjects of anti-drug, cyber offences, sexual offences against women and children, Nature protection, traffic awareness etc., Thrissur Rural Police also actively participated in the state wide programme conducted as ‘KunjeNinakayi’ and road shows are conducted in the entire police district to give awareness among the people regarding the sexual offences against the children. Assistance to senior citizens are being given in the information received through ‘Prasanthi’ helpline number. The senior citizens staying alone and suffering from various illness are given special attentions. During the Coivd-19 lockdown period, Janamythri Beat Officers have given more care to them by regular phone call and providing help in necessity.

Janamaithri Suraksha Project seeks the responsible participation of the citizens in crime prevention at the level of the local community, conserving the resources, both of the community and of the police, in fighting against crimes which threaten the security of the community. Experience shows that by seeking the active co-operation of the public in performance of police duties, the process of Law Enforcement becomes far more effective.